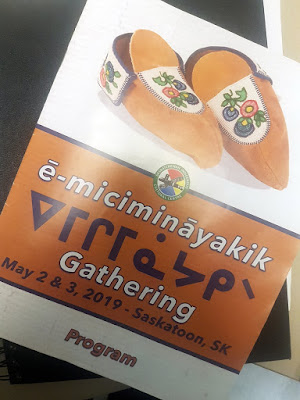 On May 2-3, the Saskatchewan Indigenous Cultural Center hosted the ē-micimināyakik gathering, or the Indigenous museums gathering-- one of the first of its kind to be held in Canada. This gathering addressed many of the challenges and concerns around making accessible, preserving, and respecting both tangible and intangible elements of Indigenous history. ē-micimināyakik roughly translates to "holding on to things for everyone,"  and that was ultimately the idea at the heart of the gathering -- how can we (both as Indigenous and Newcomer curators) hold on to things in a good way, and particularly in a way that meets the needs of those people with whom the thing originated.

So, far from being a gathering targeted only at museums, interested participants came from a broad array of backgrounds including libraries and archives (like myself), copyright offices, and other cultural centers.

Below I will summarize some of the things I learned (note that this is from the perspective of a an archivist with a European Settler background).

Popular posts from this blog

Talking About If These Places Could Talk: Snapshots of Saskatchewan by Crista Bradley

December 13, 2021
Talking About If These Places Could Talk: Snapshots of Saskatchewan Crista Bradley When I was granted a one-year research sabbatical leave from the University of Regina Archives in July 2019, I was able to move forward with a project that’s been on my mind for several years.   The objective of the sabbatical was to research and write a children's book and companion educator’s guide that would help kids connect with Saskatchewan archives and further develop their understanding of our province’s diverse history. The year was rich and the pace was vigorous as I worked to review the professional literature on youth outreach and archival/historical products designed for children, identify a theme and format for the book, and investigate publishing options.   With support from a SCAA Professional Development Grant, I attended Canada History’s Historical Thinking Summer Institute, to help me frame my approach to packaging historical informati
Post a Comment
Read more

Friends of the Provincial Archives of Saskatchewan (FOPASK)

February 22, 2022
Greetings, fellow FOPASKers. A few days ago Friend Ron sent along a couple of photos he had discovered in his family archive, which he sent along with this request: We have this photograph of Sprucedale Farm  It appears to be in southern Saskatchewan from  the lack of trees and rolling hills. With all your connections, would you have any way of finding out where this was located? I believe the owners were Don and Kate McLaren but I have been unable to find their names anywhere. With your sleuthing abilities perhaps you might come up with something.   With great appreciation,         Ron D About the gopher's sleuthing abilities, pshaw, although I did check a couple of books of Saskatchewan place names, finding Spruce Bay and Spruce Lake, both in the parkland zone on the NorthWest side. As Ron notes, Sprucedale doesn't look like a good fit. There is also the date on the barn, 1910, when there was still land to be settled on in southern areas of the province.  As for sleuthing,
Post a Comment
Read more

August 10, 2021
Across Canada, undocumented and unmarked graves of Indigenous children are being located at former Residential Schools, reaffirming the testimony of residential school survivors. The role of residential schools in the wilful dismantling and destruction of Indigenous peoples’ cultures and families is becoming increasingly obvious. Many are looking for ways to provide aid and support to Indigenous communities in their grief. Archives have a very particular and important role to play in these efforts.      At this time, we urge members of the Saskatchewan Council for Archives and Archivists to dig deep into their collections to see if they have anything that could be useful in identifying Indigenous children in unmarked graves at these residential school burial sites. Furthermore, we would encourage archivists to assess their holdings for any materials that relate to Indigenous genealogy. Families were torn apart by the residential school system and other co
Post a Comment
Read more